If your device is exposed to the outside world, firewall rules can provide a layer of security against intruders to your network. A firewall also gives us granularity in terms of what is allowed to be forwarded across interfaces. Using the rule sets described below, we can effectively control which packets are allowed to be inputted to, and outputted from, the RaspAP router itself.

Insiders have access to a UI designed for this purpose.

As with every other aspect of RaspAP's default settings, the application iptables rules are stored in an external JSON file, so they may be modified without touching code. During the install, the file iptables_rules.json is copied from /config to /etc/raspap/networking/firewall. Thereafter, they may be administered from the UI, shown below. 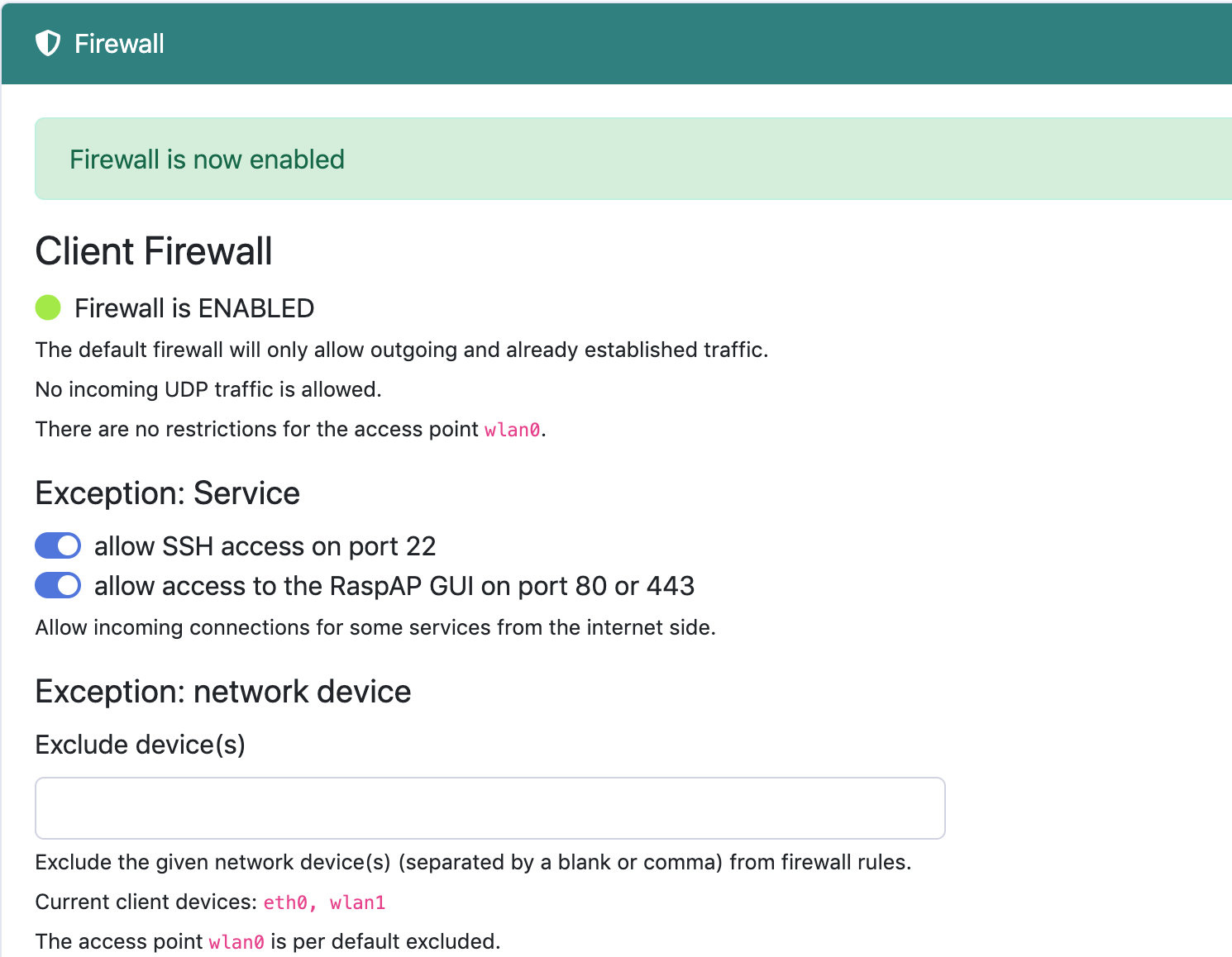 By default, the firewall will only allow outgoing and already established traffic. There are no restrictions to the currently configured AP interface (wlan0 is the default). The remaining firewall rules are grouped into four distinct classes. These are described below.

Main rules cover many functions, including allowing unrestricted traffic over the AP interface, rules for client interfaces including the tunnel device (tun0 for OpenVPN) and WireGuard (wg0, for example). RaspAP will check for the presence of an active OpenVPN or WireGuard connection and automatically apply these rules.

These types of rules include service exceptions, such as allowing ssh access on port 22 and http or https on ports 80 and 443, respectively. In addition, user-defined exception rules may be added to allow incoming or outgoing traffic from specific IP addresses or interfaces. These exception values may be entered in the UI, separated by a blank character or comma.

This rule type is required for OpenVPN via UDP and WireGuard. A list of currently active VPN server IP addresses is provided in the firewall UI.

Most entries in iptables_rules.json are descriptive and should be straightforward. An optional entry for each set of rules called dependson allows for creation of rules that depend on device names and whether a service is active.

Each dependency refers to an entry in the firewall config file. For example, ap-device or openvpn-enabled, followed by a type definition (bool, string or list). The replace tag defines which variable in the actual iptables rule should be replaced. To illustrate this, the wireguard rule set is shown below:

In this way, interdependent firewall rules may be defined and administered by RaspAP.